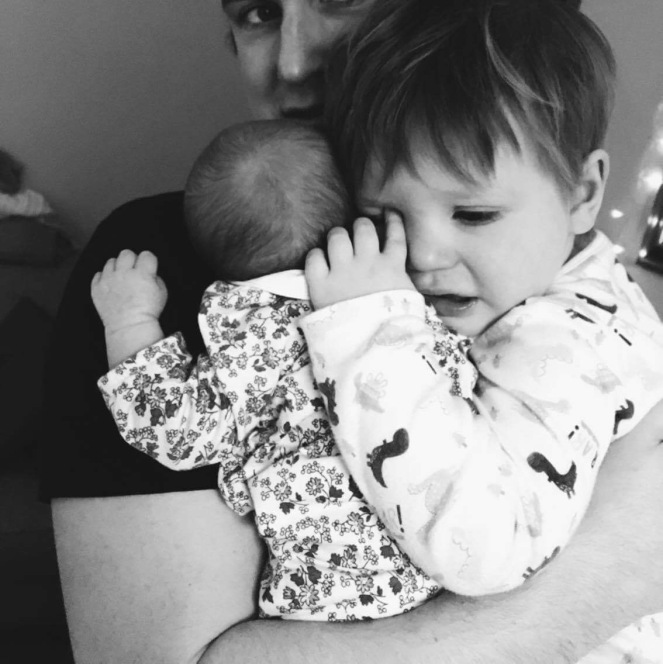 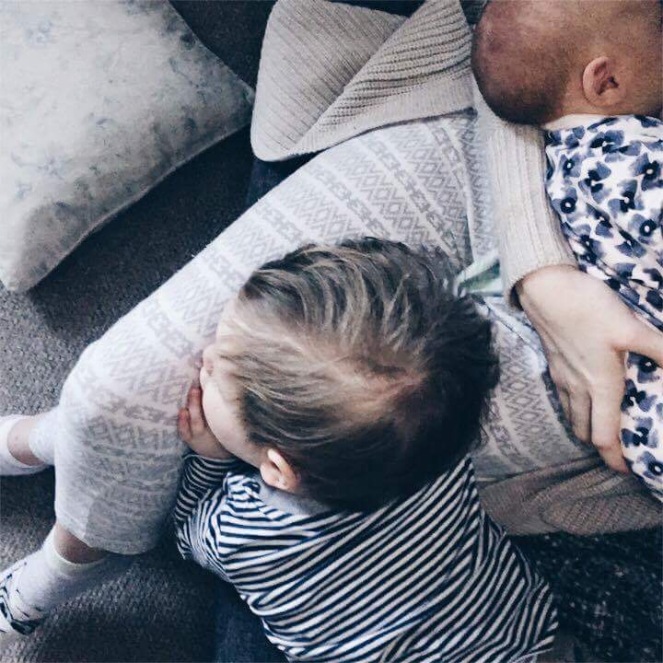 Our little Nancy Ada was born on 22nd January at 1:16pm weighing 7lbs 2oz; exactly 19 months to the day from Dexter’s birth. It’s safe to say 22 is now my lucky number! I plan on doing a post on her birth story in the coming weeks/whenever I get myself organised enough, so keep your eyes peeled for that if you’re interested.

When I found out that I was pregnant again all those months ago it was a dream come true; but did I really think this one through? I love the idea of having a small age gap in between the littlies, with the hope that as they get older and especially once they’re fully grown adults, they’ll be super close; but also mainly because it’s extremely appealing to me to get all the shitty nappies, sleepless nights, and resembling a zombie who’s sporting a crap mum-bun out of the way relatively early. Many people have 2+ kids, so it must be ok, right? But how the hell do I make this transition?

I’ve only been doing the two kiddos thing for a month, and already it’s bloody hard work. I’ve always heard people say that the hardest child-based transition is from one to two (even more so than none to one), and wondered how the hell that could be the case; surely that seventh little critter is going to be more problematic than my tiny second addition? But I suppose four weeks in and I can now kind of see where they were coming from. Everything I’ve worked so hard to put in to place both logistically and emotionally over the last 19 months has now been hit by a giant wrecking ball and smashed in to lots of tiny shitty pieces that I have to gather up and try and put back together again in the right (but slightly readjusted) order; like one of those annoying jigsaws that is entirely made up of blue sky or a tin of beans. Who can be arsed with that?!

But unlike one of those jigsaws, we actually love our kids (most of the time 😏), and want to succeed in and complete the puzzle that is parenting, if that’s even possible. So I’m trying to ignore all those comments that came whilst pregnant and are still flooding in fast since Nancy entered the world; comments telling me that ‘I’m going to have my work cut out’ thanks to the 19 month age gap. Instead I’m taking solace in the current reality that every single day there will be at least one peaceful moment in time which I can savour whilst both Dexter and Nancy catch some zeds. It’s true that I will never quite know how long I’ve got in that blissful moment as either one of them could wake and wreak instant havoc at any time, however that child-free moment will still exist, and that could be the one thing that gets me through each day with any level of sanity. At least until Dexter drops his nap- then I’m really screwed.

Aside from the holy grail that is nap time, the rest of the time with these two kids has been nothing short of chaotic thus far. I am attempting to do at least 2/3 things at any one moment, and coming from someone who is crap at multi-tasking, this can be fairly problematic for the smooth running of our household. The feeling of being pulled in all directions is not one I am enjoying, as trying to prioritise between your kids at lightening speed before the toddler pulls an entire side table and its contents on top of himself or the baby chokes on her own vomit, is the kind of thing that ‘Saw IX’ is made of. #Jigsawmademechoose #impossible

When both myself and Mr B are present and he isn’t skiving at work 😉, our house becomes a battleground in which we join forces, whilst I rejoice that I am no longer outnumbered. We have been working on the basis of one child each, and since I am breastfeeding Nancy, she’s mine and Mr B gets Dex (though we are allowed to interact with each other’s child; the rules are flexible and we aren’t monsters). We knew this was the plan since before Nancy was born, and in the run up I couldn’t help but wonder and worry about whether I would feel left out when child #1 inevitably strengthened the already strong bond with his Dad whilst I would be busy being primary caregiver to #2. Turns out I was right to worry as the little ratbag decided during week one that he hated me and even went as far as to have a screaming fit whenever I tried to go near him. It’s safe to say I was pretty distraught with this shitty turn of events, and seeing as I was already a ball of emotion ready to explode (cheers hormones and sleep deprivation), I’m pretty sure I was on the brink of a breakdown. Fast forward a few days though and all was good in the world again AKA I was back to being his favourite person (though facing tough competition).

Speaking of Dexter, or should I say The Feral Child, he is definitely working through some ‘stuff’ at the moment. It’s hard to say whether it is solely down to the recent turn of events, or whether his age is something to do with it too- which I suspect it is. Being demoted (I prefer to look at it as more of a promotion personally) from Only Child to Big Brother has, for the time being at least, turned him in to a difficult and defiant little dick. (Am I allowed to call him that publicly?) His neediness is draining, and as he is obviously used to getting all of our attention, now that this is no longer the case, getting him to do anything is such a mammoth task and most often than not takes twice as long as it did before. BUT I know this is all such a massive undertaking for him, and his whole world must feel like it’s been turned upside down; so for now, we’re dealing with his dickishness by just doing our best to keep him included, entertained, and feeling loved. (Edit: I wrote this part a week or so ago and he has definitely improved in the neediness stakes a bit since then).

Another thing that I’m finding difficult is the fact I can no longer leave the room for even a second without taking at least one of them with me unless I want to return to find Dexter sat on my newborn, or the newborn doing 360 degree spins in her swing thanks to her big brother’s enthusiastic love for her and his addiction to mischief. I’ve settled on strapping him in to the high chair if I’m really desperate, which also usually involves a game of catch the toddler round the living room before this can be achieved. Dexter is a sensitive soul, god love him, and is seriously not a fan of a crying Nancy girl. Whenever she gets upset, he kicks off too, which as you can imagine is sweet music to the ears 😒 This is especially fun when getting them both in to the car and usually leads to me uttering “what have I done?” out loud whilst inwardly considering fleeing the country solo.

Getting out of the house with kids is always going to be a ball ache, however over the last 19 months I felt I had honed in on this skill and improved so much since the early Dex days where you’d be lucky if we were on time for a 4pm meet-up. However, the pride I felt only weeks ago is now nonexistent and we’re back to being all kinds of late. Always. (At least we’re consistent). Lately our routine prior to leaving the house usually consists of getting both kiddos ready just in time for one of them to shit themselves, and by the time I have their nappy changed and them dressed again, the other one only goes and shits themselves too. Well we can’t have one feeling left out now, can we? 🙄

As for myself and Mr B’s relationship; where do I start? I’m pretty sure that every conversation we have right now is about one or both of the children; and if it isn’t, it will certainly go that way- just give us five minutes. Example topics often include, poo (I’ve mentioned this one before)/sleeping patterns/the sorry state of my engorged udders/how pissed off we both are that our children are feral, that parenting is a bastard, and that we just wish someone would come and take them away forever…etc. (I’m kidding). Our current favourite past-time happens to be arguing over who is the most sleep deprived (it’s always gonna be me #justsaying), and which one of us should get a medal for it…since when did we become so f*#king boring?!

I am very aware that this is a moany post and has the potential to sound a little ungrateful, but the truth is I wouldn’t change things for the world and am completely aware of just how lucky we are. Parenthood is hard, but it’s bloody brilliant at times too. One of the best feelings I have ever experienced has come about since being a mum of two; seeing how amazingly tender, loving, and gentle Dexter is with Nancy almost reduces me to a million happy tears on a daily basis. He strokes her hand, kisses her head, and giggles with such pure and innocent joy whenever she so much as moves or lets out a funny little noise. I’ve honestly never felt love like it.

Anyone else with 2+ kids got any tips for managing the logistics, feel free to send them my way!