If you’ve ever taken a baby or toddler away on holiday, you have no doubt felt that overwhelming and all-consuming dread in the run up to the event at all the ‘what ifs’ that may occur. ‘What if the journey there turns in to a scene from The Exorcist? What if protest planking becomes a new way of life for the 7 day duration? What if public tantrums show you up for the failing parent that you are? All distinct possibilities, but nonetheless we do it anyway whilst we gloss over all similarly horrendous incidents that have occurred in times gone by. They didn’t happen; we’ll be fine.

We decided to ‘holiday’ in Norfolk this year as we had to rule out foreign lands due to me being up the duff again, boo! (to the lack of foreign culture AKA wine, not the second kid thing…honest). I have to say I’m a sucker for a holiday abroad; there’s just something to be said about being in an airport for hours on end, wandering round duty free searching for something, anything to buy which isn’t actually free of duty, and then getting excited about an airport (or even worse, in flight) meal which turns out to be shitter than it would be in a normal restaurant, isn’t there? It feels special. So I wasn’t mad keen on this ‘holidaying’ in the UK thing (sorry birth place!), but someone’s gotta do it I suppose.

I guess you could say that the one saving grace about not travelling abroad with the toddler meant avoiding being locked in a confined space with a heap of strangers at 40,000ft (I just googled ‘how high do planes fly’) and risking the chance that he may scream for the entire duration and that you will be shot disgusted glances, or worse, verbally abused because you can’t shut your child up. Every cloud. Instead we were the only lucky buggers who were confined in a small space with an even smaller child who has noticeably larger lungs. Just kidding, he was actually alright, that son of ours.

Mr B is a massive fan of the beach so we spent a few days there, giving Dexter ample opportunity to frolic till his heart was content, with no real restrictions on what he could do or where he could go; unless he decided the place he wanted to go was to the bottom of the ocean of course; we’re not that lenient. Zero restrictions to Dexter is like a big fat G&T with extra lemon to me, or a sport and beer filled day to Mr B; bliss. It’s safe to say he is definitely a beach lover like his Dad, and watching him so content in the water and sand had to be one of my favourite things from the holiday, or life, actually.

I’ll tell you what I’m not a massive fan of though; sand. Hate the stuff! Oh god do I try to embrace it but those tiny grains of hell manage to get everywhere; like have you ever felt anything worse than finding half of the Sahara nestled in your fandango? Throw a toddler in to the mix and you’re really in for it. No longer had we got to the beach on our first day, laid out our beach friendly rugs and our ‘perfect for Instagram’ picnic hamper, had Dexter managed to fit 5 million grains of sand in to every possible orifice of his chubby, sun-starved body.

We usually call him a ‘human dustbin’ due to his tendency to gobble down anything going, however a sand sandwich with a side of local delicacy ‘salad a la sand’ is not usually on the expansive menu. It was now. And whilst I’m here I might as well dish out a bit of advice to first-timers/novices: avoid changing a nappy on a beach at all costs!!! Particularly if you have an over-active, wriggly little human and no wind shield to ward off any of those troublesome sand grains. As soon as we (stupidly) laid him down to change, he kicked off and shoved his hands straight in to his eyes and preceded to rub them right in there; he was basically DIY’ing his face off. 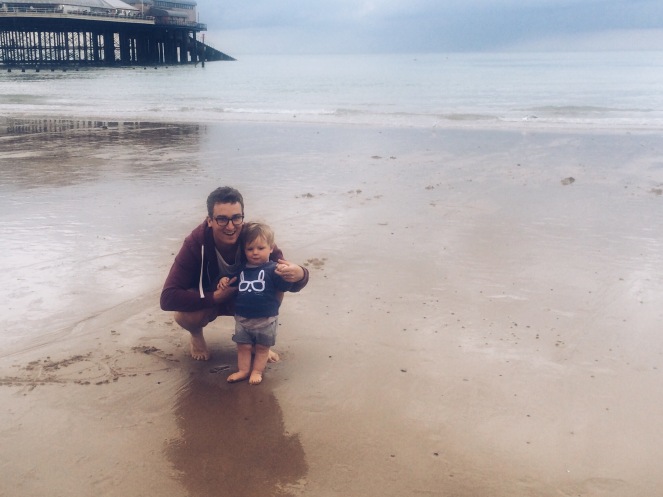 It’s easy to reminisce about a holiday pre-child and all the things you used to get up to; meals out past 6:30pm, hours and hours of sunbathing with a book you can’t put down (and don’t have to), and drinking gallons of wine/cocktails in a bid to getting suitably pissed. Instead we did things like rearranging the entire furniture collection in the holiday let to barricade Dexter in to a cosy but child-friendly cage, or dodging any sign of a disabled person so as to avoid Dexter shouting “CAR!” in their general direction since he believes that wheelchairs and mobility scooters fit in to that category. We did try to rescue a couple of the ‘old us’ things though as a way of sticking two fingers up at all those childless people who say that a holiday isn’t a holiday any more once you have kids. I’ll let you decide whether or not we succeeded.

Being strict with Dexter’s bedtime routine means concerns arise when it comes to a holiday. He gets his bath at around 6:30pm, and is usually in the land of nod by about 7:15-30pm. I know this isn’t completely sustainable though, and decided that whilst away we should try a couple of nights ‘off’ his routine in the hope that it acted as a sort of practice run for when we go abroad next year and I can drink ALL THE WINE minus bump.

The first time we tried this we went for the ‘sleep in pushchair on way to restaurant’ approach; the idea being that Dex would fall asleep on the walk to dinner and then quietly rest in his slumber until we carefully placed him back in his cot a few hours later with little more than a few cute coos. Despite choosing a restaurant a safe enough distance to get us home and dry with sleeping baby, the ample distance did not suffice and our little ray of sunshine would not for the life in him go to sleep. It didn’t help that once inside there was another cute (but screaming) toddler at dinner there to entice Dexter over to the dark side. So after eating our starters separately whilst I manically pushed the buggy back and forth in a secluded corridor like some psychopath out of a horror movie, we resigned to sharing a pretty pleased with himself toddler on our knees over main course and skipped pudding altogether. It turns out Dex was pretty good whilst perched upon us in the end, and the food was relatively bad. All in all an almighty parenting fail.

The next morning Dexter slept in for all of 6 minutes, so the late night was clearly worth it. On the plus side, no hangover for this tee-total baby momma to be, so it was almost bearable. The next time we attempted to sidestep routine was the final night of our holiday, and this time our chosen approach was to drive to the venue which was a sure fire way to get our wild child to sleep. Fast forward 45 minutes (the journey time was 30), and an extended trip around the dark countryside roads (thank God for SatNav) and we still had a very awake toddler. Mr B and I looked at each other wondering what on earth our lives had become, and if we didn’t laugh we would cry, so of course we laughed whilst checking our watches to see how much time we had remaining to get our stubborn mule of a son to sleep before our reservation was upon us. 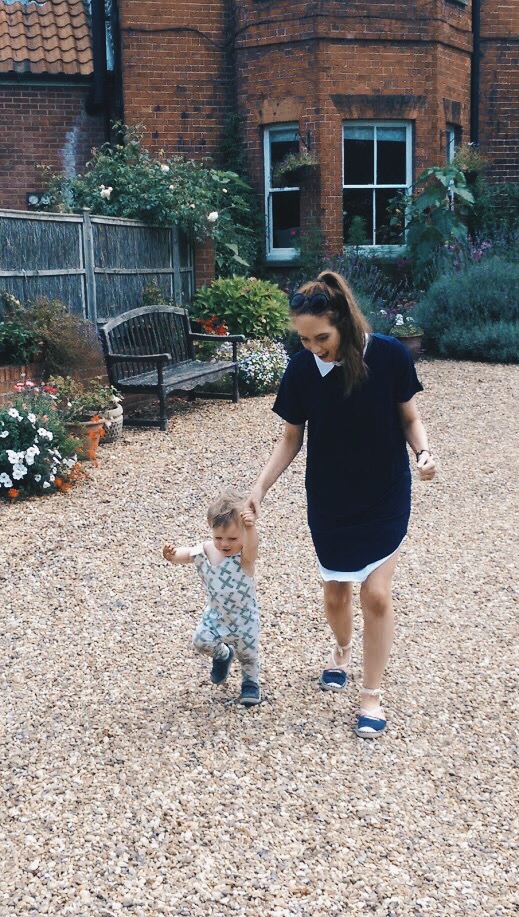 Lucky for us Dex fell asleep just minutes before we arrived at the gorgeous little pub in the middle of nowhere, and despite the louder than necessary belly laughs from the bald-headed man in the corner, he seemed to be in it for the long haul and didn’t even flinch in his little spot by our feet in the car seat. That was of course, until the bald belly-laugher and half the customers in the pub emptied out in a matter of minutes, and the place was suddenly too eerily quiet for Dexter to manage to sleep through it (figure that one out).

I’m not sure if our son has magical powers, or just a strong, slightly misplaced ability to sniff out the ending of a starter course and the scrumptious smell of a descending main, but he once again arose on the arrival of our main dish (which this time was bloody beaut … GO THERE if you’re ever in North Norfolk) and we once again had the pleasure of our little mate sat bold as brass on our knee and stealing our chips at 9:30pm. Past me would have lost her shit at the swerving of routine!

The present me however embraced a little extra time with our pride and joy, however unexpected (it wasn’t really, was it?), and concluded that a little break from routine every once in a while is no bad thing. Who am I; the schedule police? So we laughed and we ate and we chatted to waiters and a gorgeous family on the next table, and then left (again sans pud) and took our littley to bed after his late night at the pub. Dirty stop out.